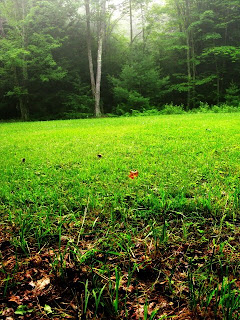 I fasted on Yom Kippur. That was Thursday, and now it is Sunday and I'm still feeling the effects of a day of being empty. I hadn't realized until that day, how much stuff I give myself every day! Almost anything I want. On Yom Kippur, I didn't give myself anything tangible.

When I walked to the park, I only took my 2 keys. That was it! No wallet, no food, no water, no nothin'*, as they say in lovely bklyn. When I sat in the grass, I felt really different. I wasn't thinking about meeting anyone, or what café I would go to get lunch, or that I needed to accomplish anything, anywhere. There was only grass, clover, sun, and a few other people, some empty like me, lying in the park like little blankets of energy. Usually there is a thicker layer (stuff) between myself and nature. By taking away the distraction and desire of STUFF, that layer felt transparent.

A few weeks ago when we were working on a project, my friend Gil said that "art doesn't get made on a full stomach." I was hungry and didn't really want to hear that at the time, but we got our stuff done, and then we ate and it was delicious.

It's been a while since I've allowed myself to be empty enough to make art. I'm not just talking about food, but all the other stuff I've piled on so that it's hard to move. This year, I am going to try to be patient with emptiness. In yoga, or pranamaya, the exercise would be to focus on the exhale, rather than the inhale.

*this picture is from before, I didn't bring my camera!

Living room yoga started 11 years ago when I was a new teacher with an big empty living room. I invited my friends and friend's of friends. I changed my downstairs hallway into a dressing room complete with hooks in the walls and a canvas curtain. It was very real and exciting and sweet.

Sadly, I had to move out of that spot, but living room yoga persevered ~ in the living rooms of my students, in yoga studios, in corporate offices and in nursing homes. So its not just living room yoga, its really where ever people need room for living. I go most of these places on my bicycle, like a yoga delivery person.

Teaching and practicing yoga is really about experience in action. That and love. For yourself and for your students.

Now if you want to try my class in your own living room, either in person or thru my delightful DVD's, check it all out on my website: www.livingroomyoga.com

lots of yogic love to all of yous ~